Ben Baba Abad is back! After 100 years of peace, the sorcerer has returned to Agrabah to spread his evil. There's chaos in the marketplace. The palace guards are acting strangely, and the Genie is imprisoned in Abad's underground temple of evil. To rescue the Genie and save Agrabah, Aladdin and Jasmine must master the terrible maze that surrounds the temple, and the dangers lurking within. And if they make it...they still have to face Ben Baba Abad!

Aladdin and Jasmine were happily wandering through the marketplace on a nice day in hopes of purchasing some fine goods when suddenly a powerful earthquake hit, creating a large fissure in the ground, alarming many of the citizens. Luckily those in danger were protected by Aladdin and Jasmine. However they were unaware that from this fissure a dark red mist emerged forth and took the shape of sinister being that hid itself in an abandoned building. This entity was Ben Baba Abad, an ancient sorcerer who was sealed away long ago was now free once more. After a hundred years, Abad swore to conquer Agrabah once again. Upon release, he witnessed Jasmine and Aladdin in the marketplace and witnessed the popular refer to them as royalty. He then knew that if he could control these two he could control all of Agrabah. Upon touching one of the melons in the bazaar, it became tainted with his magic which then spread to a merchant upon touching the melon who then spread it to the other merchants and then the crowd who then were overwhelmed with feelings of hostility and began attacking each other much to Aladdin and Jasmine's shock. Soon Aladdin and Jasmine would also be touched by the dark curse, but just then Genie arrived from his quick trip to China for some genuine Chinese take out. Aladdin and Jasmine requested Genie's help who then summoned a small rain cloud which poured water on all the cursed citizens, snapping them out of their violent daze. Abad could not believe his eyes at the sigh of a mighty genie before him. He knew that with a genie's power he could easily conquer not just Agrabah, but the whole world.

Despite Genie's efforts, the Royal Guards remained under Abad's control and ordered them to capture Jasmine and Aladdin. He then returned to the abandoned building, and using his magic he turned it into a welcoming cafe with a haunting tune, luring in more victims for him to take control of. Back at the palace, Aladdin and Jasmine told the Sultan of what had happened, but his new advisor Khalid refused to pay it any mind and told them that the Sultan had more pressing matters to attend to. The Sultan found what Aladdin said to be familiar to a legend from 100 years ago which he did not remember too well, but he was suddenly taken away by Khalid to take care of his duties. Genie and Abu then made to later on turn Khalid into a frog. Aladdin however was determined to find out what was happening and so ordered Abu and Genie to scout the town for any suspicious activity and for Jasmine to stay in hiding for her safety while he and Magic Carpet went to Jafar's laboratory to see if the old sorcerer had any books that might hold more insight on the incident from 100 years ago. Jasmine however became frustrated at Aladdin at being unable to help. While she left off some steam, she was unaware that her servant Aziza had been touched by one of the cursed guards and was now on her way to serve Jasmine a suspicious drink. Rajah who was with Jasmine sensed an evil presence within Aziza and tackled her, but all this did was place the curse of the Red Evil on Rajah who then tried to attack Jasmine, however Rajah tried to fight back against the curse. Aladdin meanwhile had discovered a book in Jafar's study detailing the events of 100 years ago. The evil sorcerer Abad had usurped control of Agrabah from the Sultan of his era and brought chaos upon Agrabah, however he was defeated and sealed away by a good sorcerer with a golden talisman. Aladdin then heard Jasmine's screams and so he and Carpet raced down to save her, with Carpet taking Jasmine away while Aladdin trapped Rajah in Jasmine's largest bird cage.

Elsewhere, Genie and Abu were at the marketplace and were shocked to find it completely deserted. They then noticed a mysteriously new but lively cafe and made their way inside, upon entering Genie was confronted by none other than Abad who had been expecting the genie's arrival. The two then dueled with magic volts flying about. Abad then tried using the Red Evil on Genie, but amusingly surprised at Genie being immune to the power of the Red Evil. Abad then unleashed a flurry of magic bolts upon Genie and transformed his hand into a red mist which wrapped itself around Genie, before he knew it Genie had been transformed into a small toad and trapped inside a golden box. Abu then ran away in fear as Abad began attacking the little monkey but Abu managed to get away as he leaped towards the rooftops and made his way back to the palace. Upon arriving at the palace, Aladdin knew something had gone wrong when Abu did not return with Genie.

Aladdin, Jasmine, Carpet and Abu then went to explore the deserted marketplace and found the cafe. They donned disguises and entered the sinister adobe but quickly fell down a trapped door and felt into the tomb that had held Abad prisoner for 100 years. Abad then coldly welcomed the group to his "home" and told them that he held the Genie prisoner and if they want him back Aladdin and Jasmine must traverse his underground maze which he constructed during his imprisonment. If they go down the right path they shall find their genie, but if they go down the wrong path then the cursed Rajah and royal guards would kill them. Abad however gave them a third option, he reveals to Aladdin that since he freed the genie he has the power to revoke his freedom by declaring him a slave once more, so if they desire their freedom, Aladdin must make the Genie a slave again and give him to Abad. However Aladdin refuses, claiming that no one can undo the Genie's freedom. A furious Abad then threatens to put Aladdin and Jasmine under his control, but Aladdin decides to taunt Abad and mock his abilities as a leader, claiming Abad does not have the wisdom necessary to lead others. This naturally infuriates Abad who then decides to prove himself by having Aladdin take on his maze to see just how wise Aladdin is, so if he wins he will let Aladdin and his friends go, but should he lose Genie must become his. With this Aladdin had bought himself and his friends more time and they began exploring the maze in hopes of finding Genie.

Aladdin and Jasmine then split up to cover more ground, with Aladdin and Abu going to search for Genie while Jasmine and Carpet went in search of Rajah. Aladdin and Abu continue to trek through the dark tunnels until they came upon a horde of large rats which begin to pursue them. The two then find themselves overlooking a deep pit filled with Giant Scorpions as the rats draw ever closer. With no other option, Aladdin grabs onto one of the hanging roots and swings over the pit as the vicious scorpions try to sting him and cut him. Aladdin is luckily able to avoid their attacks and makes his way to the other side. Meanwhile Jasmine and Carpet end up being washed away by a torrent of water that leads them down a dark path which thankfully takes them straight to Aladdin and Abu. Reunited once more, the group finally reaches the end of the maze and finds a sinister hall full of enslaved humans bowing before a stone throne where Abad now sits and is guarded by Rajah while the Genie's box rest below his feet. Aladdin and Jasmine then call out the shifty sorcerer for his deception but he merely laughs off the notion that he would ever play fair. He then attacks the group which avoid his attacks thanks to Carpet's speed. Abad then unleashes a powerful bolt which hits the roof of the caverns causing a small quake which causes Abad to fall, Rajah to become unchained and for Genie's box to slip away. Abad grew only more furious and began firing more bolts in every direction. Aladdin then saw Genie's gold box and remembered a passage from Abad's legend and how he was defeated by a gold talisman. Aladdin then grabs the golden box and when Abad unleashes a mighty red volt Aladdin holds the box in front of him which blocks the bolt as it breaks and sends the bolt flying right back at Abad, stunning him and neutralizing his powers. With the box broken, Genie is freed once more and he unleashes a ball of blue energy on the powerless Abad which teleports him away, hopefully for good. Aladdin then asks Genie where he send Abad off to, but Genie simply said "to a place with no Zip Code". With Abad defeated, the power of the Red Evil began to fade and Rajah and the people were back to normal. But this also caused Abad's maze to fall apart, but in a flash Genie mustered all his strength to teleport everyone in the maze away back to the surface. With peace restored, Agrabah cheered for Aladdin and Jasmine as they went back to the palace to celebrate. 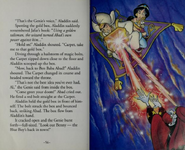 Retrieved from "https://aladdin.fandom.com/wiki/A-Mazing_Aladdin?oldid=18225"
Community content is available under CC-BY-SA unless otherwise noted.