Frank Welker
Abu is Aladdin's's pet monkey and friend, alongside Genie and Carpet.

He is a small and slender copper monkey with a red vest, red above with a purple bottom fez.

Occupation as a thief and is a kleptomaniac. He is scheming and sneaky and hates danger. However, he is also very loyal to Aladdin and is willing to risk his life to save him and his friends. He tends to be Iago's partner in crime, but is less deceitful and more honest and trustworthy than Iago is. Like Iago, Abu can get frustrated rather quickly and hates to be made a fool of, especially by someone as close as Aladdin. And he is also known as astute, big-hearted, unselfish, thoughtful, helpful, efficient, mischievous, optimistic, nice, kind-hearted, energetic, feisty, adventurous, benevolent, unswerving, tidy, humble, empathetic, mild-mannered, open-minded, naive, keen, emotional and sensitive.

In the first film, Abu is seen accompanying Aladdin during his daily adventures as they try to steal food to live. When Abu and Aladdin finally are about to eat, they see two children looking for food among garbage, and Abu is forced to share his stolen food with them when Aladdin voluntarily does so. After Aladdin gets arrested by Razoul on Jafar's orders, Abu enters the dungeon but is unable to free his friend. It is a disguised Jafar who frees them in a plan to use Aladdin to get access to the Cave of Wonders and retrieve the Genie's lamp. Inside the cave, Abu disobeys the command of the guardian of the cave and tries to steal a ruby, which causes a cave-in and almost costs his and Aladdin's lives. When they are about to exit the cave, Aladdin gives Jafar the lamp and, in turn, Jafar is about to kill Aladdin but Abu attacks him back and takes the lamp back. After meeting the Genie, Aladdin wishes to become a prince and Abu is transformed into an elephant as part of the disguise. Abu is transformed back to his original form by Jafar during the climax of the film, when he is about to attack the sorcerer. Abu and Aladdin are later sent by Jafar to a far-off place but return to Agrabah using the Magic Carpet. Once in Agrabah, Abu is transformed into a toy monkey by Jafar when he tries to take the lamp back. Abu returns once again to his original form at the end of the film when Jafar is defeated.

Abu is first seen taking treasures from Abis Mal and his men, and distributing them among the poor people of Agrabah, against Abu's will. He is initially skeptical of Iago's reform, but eventually warms up to him. Abu is one of the first to know about Jafar's return, and is imprisoned along with the Genie. Abu and the others are freed by the Genie who was in turned freed by Iago. Abu participates in the final battle against Jafar.

Abu plays a supporting role in the TV series, often accompanying Aladdin in his adventures. In one episode, he is worshiped by a lost civilization as their great protector. During his time working with a group of circus performers, during the episodes Seems Like Old Crimes Parts one and two, he met his friend Aladdin.

Abu goes with Aladdin to find his father and later to the Vanishing Isle. 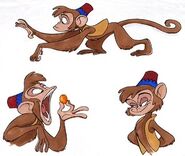 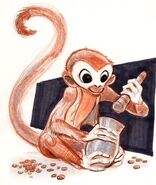 Add a photo to this gallery
Retrieved from "https://aladdin.fandom.com/wiki/Abu?oldid=19042"
Community content is available under CC-BY-SA unless otherwise noted.