Start a Wiki
Abu and the Evil Genie! is the third book in the series, Aladdin: Six New Adventures.

There's a bad-news genie named Ashab Khan on the loose—and he's kidnapped Abu! Aladdin, Jasmine, and the Magic Carpet follow Khan's smoky green trail to an invisible desert oasis, where the giant green genie makes Abu his slave. Can Aladdin save Abu and set a trap for Khan the All-Powerful—before he destroys Agrabah?

One morning, the happily unaware duo of Aladdin and Abu had been serving themselves breakfast in the palace when Abu grabbed an unusual bottle that had been stored away, thinking it to be an ordinary bottle of apricot nectar. Finally uncorking it, a mysterious green smoke began to emerge from the bottle and an evil genie calling himself Ashab Khan was freed once more and revealed that he was not bound by any rules to obey a master, much less a monkey such as Abu due to the circumstances of his imprisonment, and as such was not obligated to grant wishes. He then grabbed his "master" and whisked him away with the intent of making him his slave. Aladdin and Jasmine quickly go in pursuit of the monstrous genie in hopes of saving Abu.

Khan carried Abu across the desert who struggled as much as he could to escape the genie's grip, but nothing he did phase him, and biting his rapidly growing scales only filled him with disgust. Khan and Abu then arrived at an enchanted oasis in the desert hidden behind an invisible barrier. Khan then placed a magic shackle upon Abu and gave him a magic jug, ordering him to fill the magic jug with as many fruits as possible to keep him appeased until the day Abu dies. At that moment, Aladdin and Jasmine aboard the Magic Carpet had followed Khan's misty green trail through the invisible barrier. Upon entering, they found Abu in his sorry state but were unable to free him from his enchanted shackle. Just then Khan appeared who scoffed at their attempts to free Abu. Aladdin then confronted the mighty genie demanding that he let Abu go, but Khan laughed off his demands and summoned a sea of snakes to kill Aladdin, but the young warrior proved more formidable then he appeared, managing to fend off the snakes while mocking Khan. Having had enough of the human intruders, Khan banished them from his oasis and sent them flying back to Agrabah where they were to endure a very painful landing. All seemed lost for the young pair, but they were suddenly caught by a giant baseball glove held by none other than Genie who had heard of Khan's release from the "genie grapevine" and immediately came to Al and Jas's rescue. The three then made their way back to the barrier. Along the way, Genie told the duo of Khan's origins, having been an evil genie who once got into a dispute with another good genie which ended with the good genie sealing Khan away in a bottle of apricot nectar rather than a formal imprisonment, making Khan a very dangerous genie if he was now free. Magic Carpet still waited unaware of what had just happened outside the barrier when the group arrived, but they realized they could no longer enter the barrier with it having been locked by Khan. Genie then conjured up a magic blue key to unlock the barrier. Upon doing so, Khan became aware that another genie had come to his domain.

Khan appeared before them angered, demanding they leave his domain before they faced his wrath but they refused to leave without Abu. Genie then formally challenged Khan to a Dosh Ka, a genie duel for ownership of Abu. The two then entered a duel of spellcasting chaos which genie appeared to be winning, even trapping Khan in magic dome and wrapping him up like a mummy, but Khan's fury only grew and he broke from his confinement and then conjured a mysterious spell that dazed Genie and sent a dark cloud over to Agrabah, with Khan declaring that he would destroy the city as retribution for being defied. As Khan focused himself on the city, Aladdin and Jasmine took this opportunity to find Abu. Upon bringing him out of the oasis, Abu was still magically shackled and bound to the magic jug, however Aladdin remembered the magic key Genie conjured up before and used it on the shackle, freeing Abu. Khan began to lift Agrabah high into the sky of the far off distance with the goal of crashing it into the earth below. Just then Aladdin shouted at Khan, who looked back to see his slave freed. Angered by this defiance, Khan lost his focus and fell into a blind rage which gave Abu the opportunity to climb upon Khan and place his head in his own magic jug which sucked him inside, trapping him in a new prison once more, hopefully to never be opened again. Just then the city of Agrabah, now free from its spell began to fall to the ground, but Genie had also been released from Khan's hypnotic spell and used his own powers to gently restore Agrabah back to its original position and restoring the city as if nothing had happened. Khan's bottle was then sealed away by Genie, hopefully to never be seen again. 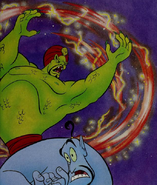 Retrieved from "https://aladdin.fandom.com/wiki/Abu_and_the_Evil_Genie?oldid=18025"
Community content is available under CC-BY-SA unless otherwise noted.