Agrabah
Al-Hakeem or simply "The Fire Breather" is a fakir who does street performances in the streets of Agrabah.

He is a tall and lanky individual with pale skin, balding hair, a hooked nose and a skinny frame who only wears a simple white turban and shorts. His most notable trait though are his peculiar pointed ears.

In the animated series, his turban's color was changed to red.

As a fakir, he engages in acts like fire eating, fire breathing and sleeping on bed of nails as a form of spiritual practice which also provides onlookers with entertainment. It seems that he has even developed the ability to use the Indian Rope Trick by the time of the animated series.

He is seen many times throughout Agrabah performing his talents for onlookers. When Aladdin is fleeing the Royal Guards, Fazal accidentally falls on the poor fakir who was lying on a bed of nails, causing him tremendous pain. Jasmine later runs into him while she is traveling through the Agrabah Marketplace, where she accidentally bumps into him, causing him to swallow his flames and give him quite a bit of heartburn. He is last seen during the arrival of "Prince Ali" in Agrabah, where Genie shoves one of his torches into the fakir's mouth.

The fakir is seen lying on a bed of nails once again, however his meditation is interrupted with the arrival of the "wind demons" who blow him away against a wall and nearly crush him with his own bed.

Power to the Parrot

Al-Hakeem and many other citizens and merchants were invited to Iago's generous banquet where the poor could eat as much as they wanted thanks to Iago's newly obtained genie powers.

While the City Snoozes

Al-Hakeem was among the many who fell victim to Mirage's sleeping spell and was later controlled into hunting down Aladdin.

Al-Hakeem occasionally appears in printed media but mostly those that are a retelling of the first film or as a background character in other stories.

He appears as a recurring enemy in several versions of the Aladdin video game where he acts as a non-aggressive obstacle that will occasionally breath fire that will harm Aladdin. 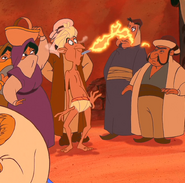 Early concept art would've had him be hookah smoker rather than a fire-breathing fakir and he would've been featured in the song "A Whole New World" where he puffs out his smoke in shock upon seeing Aladdin and Jasmine flying on Magic Carpet.