The Arachnid, (also known as The Spider), is a giant arachnid spider with a monsterious appetite and a minor antagonist Boss figure character first appears in 2000s Disney's Aladdin Nasira's Revenge video game. He appear as a huge black and yellow spider monster with a yellow skull on his hindquarters. He is huge, giant and guards The Golden Scarab Beetle Key, which that leads to the desert and the entrance of The Cave of Wonders, and the way out of The Oasis where he rules in here, that is outside The City of Agrabah The Arachnid was seen in credits after the battle with Jafar.

The Arachnid is a giant black and yellow spider with yellow dots all overs his eight legs, and a yellow skull on his hindquarters but in the boss he wears a yellow scarab beetle on his hindquarters instead a skull,he throws web at Aladdin unless if he stands still and has three yellow and red eyes he only attack when Aladdin lands on his web.

In the loading screen The Arachnid has six legs before the fight start and he has scarab on hindquarters instead the skull at the start. 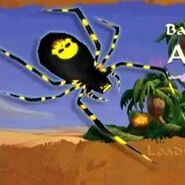 The Arachnid Aka The Spider in Aladdin Nasira's Revenge Video Game.

The Arachnid's Icon and Mugshot.

The Spider gives a fright at Aladdin during the boss fight at The Oasis.

The Arachnid's Defeat before Aladdin collects two halves of The Golden Scarab Beetle and heads towards The Cave of Wonders to open and entering.

The Spider also known as The Arachnid.

Aladdin battles The Arachnid Aka The Spider in The Oasis to get two pieces of The Golden Scarab Beetle to open The Tiger God The Cave of Wonders.

The Arachnid was seen in end credits at the end of the video game Aladdin Nasira's Revenge.
Add a photo to this gallery
Retrieved from "https://aladdin.fandom.com/wiki/Arachnid?oldid=17505"
Community content is available under CC-BY-SA unless otherwise noted.