Start a Wiki
Camels are creatures native to the deserts, from Egypt to the farthest reaches of the Seven Deserts.

Camels are common throughout the Seven Deserts, but they were first introduced to the future site of Agrabah centuries ago by Sheik Hamed, the future founder of Agrabah, as camels were the main animals used by his traveling caravan and were cared for along with the other animals of the caravan by Abnor Mal. Since then, camels had been raised by Agrabahnians for generations.

In the beginning of the film during the theme Arabian Nights, the Peddler is seen riding on his camel, Shadigna. The Peddler pulls his rope off to have the audience some of his fine merchandise.

Meanwhile, Jasmine runs away from home, in the disguise of a peasant, but having never been outside the palace before, she inadvertently gets into trouble when she gives an apple to a young boy without paying for it. Before Farouk can punish her by amputating her hand, Aladdin quickly steps in and saves her by claiming that Jasmine is his psychopathic sister. Jasmine plays along, pretending that she believes Abu to be the Sultan, and Mazin is her doctor.

As Iago makes his "grand" return to Agrabah, several camels are seen in the streets.

Camels are regularly seen in the series as Agrabah's most common animals.

The Forty Thieves used a pack of camels to hide among the "presents" they were carrying in order to infiltrate the Sultan's Palace and steal all of the treasures brought for Aladdin and Jasmine's wedding.

Jasmine talking to the "doctor" 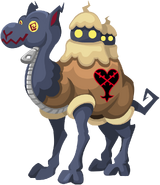 A "Cannoned Camel" from the Kingdom Hearts series
Add a photo to this gallery
Retrieved from "https://aladdin.fandom.com/wiki/Camels?oldid=19214"
Community content is available under CC-BY-SA unless otherwise noted.