Centaurs are a race of half-horse and half-man nomads that dwell in the deserts of Agrabah and beyond. They are highly skilled archers and will attack any human that attempts to "tame" them as though they were common horses.

A centaur clan once dwelled in an old city just outside Agrabah many years ago.

When Aladdin had been sent back in time to aid a mysterious woman called Zena, he confused a centaur from the past for a horse, bringing forth the centaur's ire and causing him and his clan to hunt down Aladdin.

During Aladdin's journey across the deserts to stop the evil Nasira, he traveled through ancient tombs, some of which contained the undead skeletons of long dead centaurs and which proved to be fearsome threats against Aladdin. 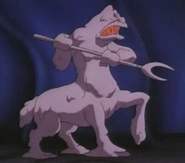 An Al Muddy as a centaur

Genie as a centaur
Add a photo to this gallery

Retrieved from "https://aladdin.fandom.com/wiki/Centaur?oldid=18384"
Community content is available under CC-BY-SA unless otherwise noted.