Cyclopes are normally giants in size, being 5 times larger than a regular human and posses tremendous strength, sharp teeth, four fingers, pointed ears and varied skin colors such as human-like or blue, such as Fashoom and "One-Eye". However the cyclops Fasir looks completely human in both appearance and size with the exception of his cycloptic eye and the reason for his different appearance is unknown, and despite their drastically different forms, Fashoom and Fasir are brothers.

Like humans, a cyclops can also learn magic and become a sorcerer, others though appear far less intelligent, acting primitive and only being able to communicate through grunts and growls.

Aladdin's first encounter with a cyclops was the giant brutish servant of the evil witch Kuzia which he mockingly referred to as "Mr. One-Eye".

Aladdin, Jasmine and Iago ended up on an island inhabited only by cyclopes which attempted to eat them.

Aladdin and his friends must stop Abis Mal from reviving the ancient evil cyclops Fashoom with the aid of a prophecy given to them by the kindly yet cryptic cycloptic brother of Fashoom, Fasir.

Night of the Living Mud

Aladdin and Genie recount how they saved Getzistan from the vicious Terror Cyclops. 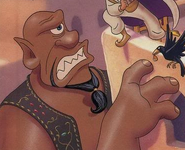 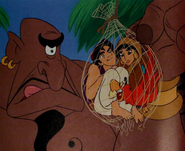 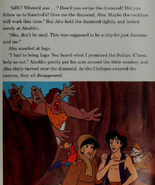 Add a photo to this gallery
Retrieved from "https://aladdin.fandom.com/wiki/Cyclops?oldid=18563"
Community content is available under CC-BY-SA unless otherwise noted.