Start a Wiki
Don't Bug the Genie! is the fifth book in the series, Aladdin: Six New Adventures.

What a mess! The Genie's belly jewel has been stolen. Worst still, he's been bitten by a strange bug. Now he's blowing steam out of his ears, bubbles out of his mouth, and his magic is out of control! To find a cure, Aladdin must cross the desert in search of the Well of Forgetfulness. He must catch the rare jewel bug. But if he doesn't, the Genie may never get his magic powers working again! 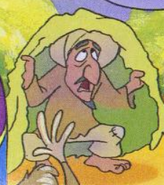 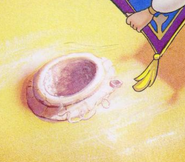 Add a photo to this gallery
Retrieved from "https://aladdin.fandom.com/wiki/Don%27t_Bug_the_Genie!?oldid=18198"
Community content is available under CC-BY-SA unless otherwise noted.