Elephants are giant pachyderms that can be found in India and Africa. While elephants are not naturally indigenous to the Seven Deserts, the Sultan's Palace of Agrabah does contain elephants in its private oasis which have been bred by the royal family's animal caretakers along with many other animals for generations and are used in parades. Because of their importance in Agrabahnian culture, elephants are featured prominently in their architecture and even the Sultan's throne is the head of a large gold elephant.

Thousands of years ago, elephants along with camels and horses were some of the first animals to be brought to the future site that would become Agrabah by Sheik Hamed, the founder of Agrabah, which were part of his nomadic caravan and were cared for by his servant at the time Abnor Mal. Since then, elephants had been raised by the royal family for generations and used as a symbol for the kingdom.

Upon Aladdin's first meeting with Genie, he conjured up many things to impress Aladdin, among them being a trouble of dancing yellow elephants.

Abu is later transformed into an elephant by Genie throughout Aladdin's ruse as a prince. Genie also made it so Aladdin's fictional princedom of Ababwa had many elephants native to it which were showcased in "Prince Ali's" welcoming parade.

As Iago makes his "grand" return to Agrabah, several elephants are seen in the streets.

When Abis Mal had stolen the Sands of Time from the Mystic, he, along with Aladdin and his friends traveled back in time to the founding of Agrabah where they witnessed Sheik Hamed and his people travel the deserts with their animals.

The Sands of Fate

The Riders of Ramond guarded a traveling caravan which included an elephant that carried a very delicate but powerful gem owned by Fasir.

An elephant was used as transportation by Aladdin to escort Akim, the grand ambassador of Ganastan to Agrabah.

Dancing Elephants conjured up by Genie

Abu as an elephant 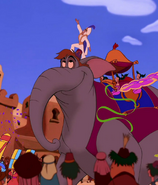 The Sultan's toys which include elephants

A spotted elephant from Jasmine and the Disappearing Tiger 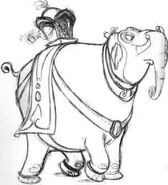 Concept art of Genie flying through the sky on elephants 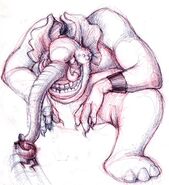 Rejected concept art of an evil elephant-like genie from the first film
Add a photo to this gallery
Retrieved from "https://aladdin.fandom.com/wiki/Elephants?oldid=18802"
Community content is available under CC-BY-SA unless otherwise noted.