Genie of the Lamp, Eden's boyfriend

"(refering to Aladdin) You are smaller than my last master"
—Genie

The Genie is the tritagonist of the Aladdin franchise. He is a magical genie, and Aladdin's friend. It's never revealed whether he has a real name or not. As a genie of the lamp, he must grant three wishes to the holder of the lamp. He is granted with "phenomenal cosmic powers", but is confined to the "itty-bitty living space." Not much is known about him, but he was trapped in the lamp for 10,000 years.

Throughout all three movies, Genie has been seen in various forms including some notable impersonations. His default appearance, though, is a blue, barrel-chested man with three fingers and black hair tied in a ponytail and a beard with a swirl that sticks out at the chin. For most of the first movie, Genie is seen mostly with his lower-half as smoke, but, after being freed by Aladdin, Genie is seen more on two legs. Genie normally wears a red sash around his waist, a gold earring which in the movies is seen on his right ear, and a pair of gold bracelets that come off after his freedom is given to him (by the next movie, Genie is seen wearing the bracelets again) and wears baggy pants with brown curly-pointed shoes.

Unlike what one would expect from an all-magical genie, Genie of the Lamp has a very happy, fun-loving character and is rarely seen without a big smile on his face. He often likes to crack jokes, in his impersonations or other forms, and does this in serious conversations to help ease any tension.

But, Genie is also very generous; even during his time when he was still a slave to the lamp; he had done what others would say “Gave more than what he took”. For example: when Aladdin gave his first wish to become a prince in order to impress Princess Jasmine, Genie did more than just make him a prince but even gave advice and pointers when Aladdin tries talking to Jasmine at her balcony. Even by the end of the first film, Genie is willing to give up his freedom for Aladdin and Jasmine.

Genie is also very wise and intelligent when he gives advice or comfort. The times when he is sad is when a friend or someone he comes to trust is hurt/in trouble.

The Genie is the tritagonist of the movie. Eventually, his lamp is placed in the Cave of Wonders, where it is found by Aladdin. Aladdin (nicknamed "Al" by Genie) tricks Genie into freeing himself and Abu from the Cave of Wonders without having to wish for it. Aladdin uses his first wish to become a prince to impress Jasmine, but not before promising to Genie that he will free him from the lamp using his third wish. When Aladdin (as "Prince Ali") stays in the palace, Jafar puts Aladdin in chains and throws him off a cliff into a river. Aladdin unconsciously rubs the lamp, causing Genie to save Aladdin by using his second wish. As Aladdin is coming clean to Jasmine about his true identity, he leaves the lamp in his chambers, which Iago steals and gives to Jafar. For his first wish, Jafar becomes sultan of Agrabah. For his second wish, he becomes the most powerful sorcerer in the world. Aladdin is sent to the ends of the Earth by Jafar's magic, but returns via Carpet to retrieve the lamp. Jafar stops him and uses the lamp to make his final wish: To turn himself into an all-powerful genie. Aladdin grabs Jafar's lamp and genie sends Jafar and Iago to the Cave of Wonders. Genie, wanting Aladdin to be happy, urges him to wish to become a prince so he can marry Jasmine. Aladdin wishes for Genie's freedom and Genie goes off to see the world.

The ​Return of Jafar

The Genie is a supporting character in the movie. Genie returns from his trip around the world, discovering there was nothing in the world quite like a friend. He also lost some of his powers now that he was separated permanently from the lamp. These powers are restored in the TV show(After this movie) in the episode: The Book of Khartoum.This power loss is apparent when he is defeated in battle with Jafar, whom is a genie with a lamp. Iago, whom has decided to join up with Aladdin and friends, and thus frees Genie, Sultan, Abu, and Jasmine. They work together to defeat Jafar, which Genie revealed could be defeated by destroying Jafar's lamp.

The Genie is the main protagonist of the movie. Genie is Aladdin and Jasmines wedding planner, and easily defeats the forty thieves, causing them to retreat. He later battles them again on the Vanishing Aisle, where he turns into multiple paratroopers with laser guns, and easily defeating them there as well .

Genie has appeared in every installment so far of the Kingdom Hearts series of video games. In Kingdom Hearts, he follows the events of Aladdin generally, but with minor differences. Aladdin's first wish is to be saved from a sand whirlpool. Aladdin's second wish is to save Jasmine, but is denied when Iago steals the lamp. Jafar wishes for Genie to find the world's Keyhole, which takes him to the Cave of Wonders. When Sora, Aladdin, Donald, and Goofy arrive at the Cave, Jafar's wishes for Genie to crush them. Finally, Jafar uses his third wish to become a genie, resulting in his demise. Genie appears much less in Kingdom Hearts II and Kingdom Hearts 358/2 Days. In all appearances, he is voiced by Dan Castellaneta. 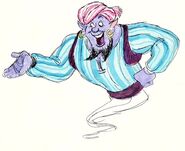 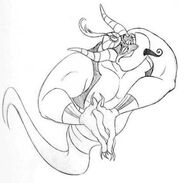 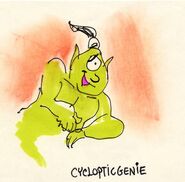 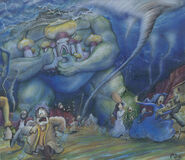 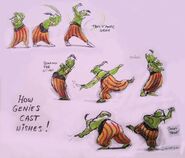