Genie's Lamp is the magical oil lamp that served as the prison of the once all-powerful Genie for countless eons. Because it contained the all-powerful servant of the lamp, it had been coveted by many for thousands of years. But after Genie was freed, it became an ordinary oil lamp which served as Genie's home due to it being the only home he ever knew (and because all of his belongings were in there).

"Do not be fooled by its commonplace appearance. Like so many things, it is not what is outside, but what is inside that counts."
—The Peddler

The lamp itself resembles a simple bronze oil lamp, a common container for genies alongside bottles. The interior of the lamp has usually been implied to have all the necessities of a modern home, such as a bathroom, living room, a dining room and anything else Genie might need. Despite these modern furnishings, the interior was described by Genie as an "itty-bitty living space", but this is understandable as even a nice home with many luxuries can be considered "itty-bitty" when its essentially one's prison, making it natural for Genie to have originally resented his home in the past, but since his freedom, Genie now considers it is his beloved home which he can freely come and go from. Since his freedom, Genie usually has Aladdin keep the lamp on his person who in turn has kept it in his old hovel before moving into the Sultan's Palace where the lamp is now kept.

The lamp has existed for millennia, though how Genie was imprisoned in it is unknown, though his intense fear of Mukhtars may hint that they were possibly involved. Over the centuries, the lamp went through many owners, such as Ajed Al-Gebraic, Rama Tut Tut, Fatooma, just to name a few. Eventually though under unknown circumstances, the lamp was hidden deep within the Cave of Wonders where it would remain untouched for 10,000 years, due to that the cavern could only be summoned by a golden scarab and entered by an individual known as the Diamond in the Rough.

The evil vizier Jafar of Agrabah had spent many years searching for any information he could find regarding genies, with his research eventually leading him to the discovery of the Cave of Wonders, but he dared not risk entering it. He then manipulated a man named Gazeem who perished within the cave, and later a boy named Aladdin to recover the lamp within. As the Cave was crumbling, Jafar briefly had the lamp in his possession, but as he attempted to kill Aladdin, the boy's pet monkey Abu stole it back. Aladdin used the Genie's power to escape the underground ruins of the Cave, then used his first wish to become a prince worthy to marry Jasmine. Jafar attempted to kill him the night he came to Agrabah, but Genie saved him at the cost of his second wish. As Aladdin exposed Jafar's treachery, the vizier saw the lamp in his hat and realized the truth. Later, Jafar's sidekick parrot Iago was able to steal the lamp and give it to Jafar, who used the first two wishes to become a sultan and sorcerer respectively, again attempting to kill Aladdin by sending him to a snow-covered cliff-side far from Agrabah. After returning thanks to the Magic Carpet, Aladdin tried to steal back the lamp, but Jafar discovered him and kept him from doing so. With Jafar ready to kill Aladdin, the latter tricked Jafar into using his third wish to become a genie himself, allowing Aladdin to seal him in his own lamp which Genie tossed into the depths of the desert. Aladdin reclaimed the lamp and, after considering but dismissing using his final wish to become a prince again, he fulfilled his promise to Genie and used his third wish to set the Genie free. From then on, the lamp was used as a home and residence for Genie instead of a prison.

Although freed, Genie tended to spend more time outside of his lamp than within it, with the lamp serving as a place to rest and storage space more than anything else. On at least three occasions the lamp was stolen: once by Abis Mal who sought to make the Genie grant him his wishes (unaware that Genie was no longer obligated to grant wishes after his freedom), another time by Mozenrath whilst he was asleep inside it to lure Aladdin to him, and again by a 'charitable' Iago who attempted to give it away, prompting Genie to attempt to get it back as he missed his home.

At some point, the lamp, or a similar one to it, was discovered by the Peddler who used it to tell his customers the story of Aladdin and the Genie. 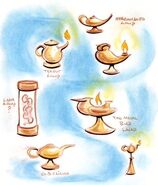 During early production of the film, Genie's lamp went through several designs, some resembling a teapot, a bird and even a lava lamp. At one point it was even considered to have the lamp be alive and serve as a helpful character to Aladdin but this was dropped.

Retrieved from "https://aladdin.fandom.com/wiki/Genie%27s_Lamp?oldid=19015"
Community content is available under CC-BY-SA unless otherwise noted.