Start a Wiki
Genie's Belly Dancers are very minor girls who were summoned by Genie. Their only appearance is during the two songs. Friend Like Me and Prince Ali.

The Belly Dancers of Genie

The Friend like me dancers: The trio were each identical to each other, being barely clothed and a fine example of youth and beauty. They had dark hair arranged in a high ponytail, each of them wore a small red thong along with a small seen-through skirt that hanged above their knees, and a small red bikini bra that barely covered their breasts and were strapless. They only appeared and summoned during Friend like me when Genie was demonstrating and examining his abilities to Aladdin and had them dance around him, teasing him with their hips doing so.

The Prince Ali dancers: These five girls were also each identical to each other, being barely clothed and a fine example of youth and beauty. They had dark hair arranged in different styles, see-through pants attached to their small bikini thongs along with matching small bikini bras that barely covered their breasts and were strapless.

Because they were sommoned and created by Genie's magic, it is unclear what their own personalities are. But they share the same personality, only one. Seductive, exotic, flirty, sexy, fun loving, entertaining, and sweet.

But the Friend like me bellydancers were flirting around Aladdin teasingly, showing that they are a little seductive around him.

As you see, when Princess Jasmine thought of needing some alone time for a while or two, pictured some episodes where she was absent for a little bit, as needing some alone time, that was when half of Genie's now semi-phenomenal nearly cosmic powers send her to the Cave of Wonders when it was still collapsed and that that is when she gets to feel the music bouncing off the walls which makes her dance to the rhythm, and the belly dancers Genie summoned were magically summoned around her again and began to play and dance with her. As well as Jasmine would examine all eight of the Belly Dancers' bellybuttons (like putting a finger in one bellybutton at a time, swirling them in circular patterns, wriggling them around, and also squishing and pinching them.)

As well as getting to know the belly dancers as they are just creations of Genie's powers and even be sent to some place in oblivion waited to be summoned if had to. As well as Jasmine would have to be returned to the palace when she feels ready to be returned and that the belly dancers would have to be disappeared to nothingness again until if she feels like seeing them again at the same spot, or perhaps their ultimate time loop in the cave with a small magical tiny gemstone in her pocket for safe keeping.

Of course if this fanfic does happen, it would give them free will and minds of their own, but keep the same personality (Seductive, exotic, flirty, sexy, fun loving, entertaining, and sassy), but also the same voice by Veena Bidasha. 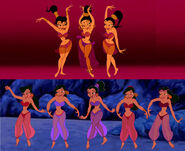 Retrieved from "https://aladdin.fandom.com/wiki/Genie%27s_belly_dancers?oldid=19442"
Community content is available under CC-BY-SA unless otherwise noted.