Iago is very greedy and normally allies himself with whomever benefits him the most. He is characterised with a frequent useage of biting sarcasm as well as a sharp wit. And he is also known as impolite, aggressive, gluttonous, obnoxious, tenacious, happy-go-lucky, erudite, big-hearted, idealistic, roguish and discourteous.

According to a piece of conversation, Jafar had picked up Iago in Agrabah's bazaar and reared him as his accomplice in crime, teaching him to speak fluently. (The Return of Jafar) He and Jafar remained together since, with Jafar often traveling the world to seek out legends and information concerning genies as well as finding knowledge and relics that would grant him the ability to become a powerful sorcerer, all of which Iago kept tabs on while making sure to remember every bit of info for Jafar. (Sneeze the Day)

Iago is a supporting antagonist in the film and Jafar's servant, second in-command, assistant, butler, deputy, and pet parrot. He resented living under the Sultan and Jasmine as much as his owner Jafar does, though he contrasts Jafar's dark brooding with angry, sarcastic ranting. Iago often says how he hates crackers which the Sultan always gives him. The Sultan seems to not know until the end of the first movie that Iago can speak complete English and is evil. In the end Iago is dragged into Jafar's lamp with him at the end of the movie and is banished to the Cave of Wonders.

Iago is the film's main protagonist. Having escaped from the lamp, Iago switched sides, mostly due to his resentment of Jafar's treatment of him and the punishment which came from being in his company. Over the course of his time with Aladdin and his friends, Iago slowly warmed to the idea of friendship after Aladdin saves him from the Sultan's wrath in return for Iago unintentionally saving him from Abis Mal, finally risking his life to kill Jafar by pushing his lamp into molten lava. After his heroic deed, he was welcomed into Aladdin's extended family. In this sequel Iago is the main protagonist.

Iago is one of the series' six main characters. He went on to provide a sarcastic, realistic, or cowardly perspective on events and was only really willing to face danger if great reward was promised. However, he was sometimes forced to battle his conscience, and generally did the right thing even when he did not have to. Iago's common schemes involved trying to sell anything with any value (real or not), trying to steal things, and trying to treasure-hunt. He could usually convince Abu to be his partner in crime, but Abu was more likely to leave at the first sign of danger and often lacked the finesse that Iago required. He harbored a crush on the rain bird Thundra, while admitting his manipulative personality made appealing to others difficult. Aladdin had occasionally exploited this, since antagonists were more willing to accept Iago as being ruthless and amoral than he was. Like Genie, Iago commonly referenced modern things for humor, even though he did not have a logical excuse like Genie did. Additionally, due to his time with Jafar, Iago possessed extensive knowledge of various magicks, which proved useful as Genie's otherwise superior knowledge was ten thousand years out of date.

See main article: Aladdin and the King of Thieves.

In the final movie, Iago is tasked with collecting the wedding gifts from the arriving guests and is shown to be more interested in the extravagant gifts than the actual wedding ceremony itself. During the raid of the Forty Thieves, he tries to defend the gifts from the King of Thieves (for personal gain, of course) but is stuffed in a perfume bottle. He's freed and they learn the King of Thieves was most interested in a beautiful scepter. Thinking out loud, Iago asks why out of all the marvelous gifts this was the only thing that the King of Thieves really wanted. But his question is answered by the Oracle from the Scepter who explains the King of Thieves seeks her in order to find the Ultimate Treasure, which piques Iago's interest. He tries to discover where the Ultimate Treasure is from the Oracle, but she is bound by one rule "One question, one answer", and informs him that he already asked his question, regarding the scepter's worth.

He accompanies Aladdin, Abu, and Carpet to find the Forty Thieves to find Aladdin's father. They sneak into the Forty Thieves' hideout and are discovered, and their law demands they die. but Aladdin's father, Cassim, who is, in fact, the King of Thieves, gives Aladdin a chance to save their lives by defeating Saluk, one of the strongest members of the Thieves, in single combat, which he does. They learn from Cassim his past and his dreams and goals. That he desperately seeks the ultimate Treasure, the Hand of Midas, which can turn anything it touches into solid gold and has proof in the form of a ship of gold. This causes Iago to take an instant interest in Cassim. When Cassim agrees to come to Agrabah, Iago helps him to get the scepter, but Razoul, the Captain of the Palace Guard, and the guards catch them in the act and the Sultan has no choice but to imprison them.

Aladdin breaks them out and is forced to join them in their escape, but refuses to leave. Iago tries to convince Aladdin to come, not wanting him to get locked up, but Aladdin is prepared to face the consequences. Aladdin tells Iago to go with Cassim, much to his surprise. Iago wishes Aladdin luck and joins Cassim.

They return to the lair only to be betrayed by the Forty Thieves under the command of Saluk, who survived his fight with Aladdin. With the scepter in their possession, they sail off to find the Hand of Midas, but Iago escapes and returns to Agrabah to warn them. They go to Cassim's rescue, and during the whole thing, Aladdin and Cassim finally settle their differences aside and truly become father and son.

Returning to Agrabah, Cassim attends his son's wedding to his new daughter-in-law but decides to leave to make a fresh start and a new life. Iago decides to accompany him in his adventures, and with a wave of farewell to Aladdin and his new wife, Jasmine, they ride off into the night.

Iago appears as a supporting character in this straight-to-DVD movie. During her portrait session, Iago and Jasmine perform "More Than A Peacock Princess" as Jasmine tires of her dull princess lifestyle. Later on, the horse of Jasmine's deceased mother disappears, leaving Jasmine to go on a search. Before she does, she attempts to find who let the horse, named Sahara, out and upon finding a fig, the favorite snack of Abu, Jasmine immediately begins to question the monkey. Iago joins her in the courtroom-esque drama and repeatedly interrogates Abu into revealing the truth. When Abu confesses, Jasmine takes it upon herself to find the horse, though Iago is openly doubtful about the situation. He eventually decides to join Jasmine, Abu, and Carpet, believing he'll witness a humorous failure. Eventually, Sahara is recovered, brought back to the Palace and all is well in Agrabah once more.

Hercules and the Arabian Night

In this crossover of both the Hercules TV series and the Aladdin TV series, which is set sometime after the third film, Iago did not appear in the episode, since he was still touring around the world with Cassim. However, he was mentioned by Jafar, who was still furious about how Iago betrayed him in the second film.

The conversation is as follows:

Hades: Jaffy, let me show you how you're missing the villain boat here. Okay? First of all, you're the man. You know what I'm saying, a big bad dude, see, you got to use a minion or two.
Jafar: I had a minion. A TREACHEROUS PARROT!

(Although Iago is not mentioned by name, Jafar's term "treacherous parrot" obviously refers to him.) 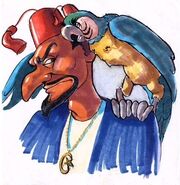 Howard Ashman's original treatment for Aladdin included an evil sorcerer known as "the Wazir", with a villainous parrot sidekick named Sinbad (named after the famous sailor from the 1,001 Arabian Nights). The character was written as a prim and proper, British-accented bird with a devious personality, he also wore articles of clothing, such as a vest and a hat, with both a fez and a turban used in concept art. Though the character was dropped from Linda Woolverton's screenplay, he was revived when John Musker and Ron Clements were brought on to helm the project. It was eventually decided that the parrot would be portrayed in a more traditional manner, with John Musker referring to the old, "Polly want a cracker!" line synonymous with the animal. He was also renamed, now being known as "Iago".

Screenwriter Terry Rossio shared a concept behind Iago on his website Wordplay, in that Jafar took all his emotions and transferred them into his parrot, leaving him free of distractions and thus more able to conjure magic. Rossio also mentioned, since Iago is too small for so many emotions to be bottled up inside, "you end up with a feathered Gilbert Gottfried."

Directors John Musker and Ron Clements came about casting comedian Gilbert Gottfried after watching his stint in the film Beverly Hills Cop II. Animator Will Finn was a self-proclaimed Gilbert Gottfried fan and asked to supervise animation on the character, which the directors allowed. Finn's redesign of Iago took inspiration from Gottfried; some notable features like Gottfried's squinty eyes and toothy grin were incorporated into Iago's character. The filmmakers also saw the casting of Gottfried as a way to prepare the audience for the manic comedy that would later be provided by Robin Williams' Genie, who wouldn't appear until thirty minutes into the film, whereas Iago was one of the first characters to appear.

Retrieved from "https://aladdin.fandom.com/wiki/Iago?oldid=19265"
Community content is available under CC-BY-SA unless otherwise noted.