Princess of Agrabah
Sultana of Agrabah (2019 film only)

The stereotypical princess life, sexism, being viewed as an object.

Princess Jasmine is the deuteragonist of the Disney classic Aladdin and related media. She is the princess of Agrabah and the wife of Aladdin.

Although the Tale of Aladdin is originally from The Arabian Nights, Jasmine is a young, Arabian princess, with her looks being summed up to simply "beautiful". Jasmine is a princess with tan skin and long, lustrous black hair, big brown eyes, and a distinct hourglass figure. She normally wears her black hair in a ponytail, held together by two light blue bands. She normally wears a light blue tube top with off the shoulder sleeves, and matching pants along with blue shoes along with a matching headband with a jewel in the center and wears large gold earrings and a matching necklace. In her peasant disguise while running away from home and exploring the marketplace in Agrabah, she wears a brown robe and a tan hood. For formal occasions, she has a purple outfit that covers more of her skin and a hair accessory that hangs lower than her trademark headband. When Jafar takes control of Agrabah for a short while, he makes Jasmine wear a red outfit with several golden accessories, such as a snake bracelet and gold earrings. Jafar later creates a gold crown for Jasmine from her shackles when he decides to make her his queen. When Aladdin takes Jafar, She wears a yellow short-sleeved shirt, blue shorts and black flip-flops. When Abu goes to the hospital, She wears lightest-blue long-sleeved shirt, navy jeans, black shoes.

Jasmine is feisty, free-spirited, seductive and in many ways resembles the "rebellious princess" archetype. She is headstrong, and longs for the freedom that other girls have. This eventually leads to Jasmine running away, but she gets into trouble as she is initially naive regarding the world outside the palace. Jasmine can be very willful; she refuses all the suitors that her father chooses, preferring to wed for love rather than for wealth. Jasmine can also be kind and caring, and is considered to be clever and intelligent. She shows a love for adventure, and often accompanies Aladdin on his journeys.

Jasmine is the soon-to-be sixteen year old daughter of the wealthy Sultan of Agrabah. Unwilling to marry any of the snobbish and self-centered princes her father suggests, she runs away from home, but having never been outside the palace before, she inadvertently gets into trouble when she gives an apple to a young boy without paying for it. Before the merchant can punish her by amputating her hand, a street urchin named Aladdin quickly steps in and saves her by claiming that Jasmine is his sister. Aladdin is later arrested by guards led by Razoul after Jasmine thanks Aladdin for saving her and the two share a bonding moment at Aladdin's place as well as developing a mutual attraction. Jasmine reveals herself to them and demands that they let Aladdin go, but Razoul apologizes and explains that he is doing so on Jafar's orders. Jasmine confronts Jafar and demands that they release Aladdin, but Jafar lies to her, claiming that Aladdin has already been executed; Jasmine is left distraught and blames herself.

After Aladdin's wish to become a prince is granted to him by The Genie, he visits Jasmine in the guise of 'Prince Ali Ababwa'. She initially believes him to be just another arrogant suitor and finally joins the parade as personal slave girl, but later accepts his proposal after falling in love with him on a magic carpet ride. During this time, Jasmine sees through Aladdin's disguise and accuses him for lying to her, but Aladdin convinces her that he sometimes dressed up as a commoner to "escape the pressures of palace life," which she relates to. She is taken back to the palace and the two share a kiss.

However, upon announcing her decision to marry Aladdin, Jafar takes over Agrabah by stealing the lamp from Aladdin. Jasmine learns of Aladdin's true identity. After Jafar banishes Aladdin to the ends of the Earth, he then makes Jasmine his personal slave girl. Jasmine distracts Jafar by pretending that she is in love with him to help Aladdin rescue her. When Jafar is about to turn around- which would mean he would spot Aladdin, she kisses Jafar, but then Jafar sees Aladdin anyway and attacks him. Aladdin ultimately outwits Jafar and has him imprisoned in a lamp of his own (as Aladdin tricks Jafar into wishing to be an all-powerful Genie). The Sultan agrees to let his daughter marry whoever she wants, and she naturally chooses Aladdin.

Jasmine begins to question her choice in Aladdin, wondering if he was trustworthy enough after he defends Iago, Jafar's former pet parrot who terrorized her father, but she quickly gets over these questions with Iago's help (who convinces her she cares about Aladdin by calling her bluff). She later accepts Iago as a friend after he helps her mend things with Aladdin, frees the Genie to save Aladdin, and defeats Jafar, risking his life for Jasmine.

Aladdin and Jasmine are still engaged. In "Do the Rat Thing" Jasmine learns that stealing is wrong. In the episode "That Stinking Feeling," she flirts with Prince Uncuthma to make Aladdin jealous but learns what she did was wrong. She, Aladdin and the gang meet a street urchin named Sadira who falls in love with Aladdin and tries to steal him from her (Jasmine) in several episodes but after a while Sadira sees that she and Aladdin don't have a future together. So she and Jasmine become friends.

Jasmine and Aladdin are finally about to wed. They're wedding is suddenly interrupted by the Forty Thieves. After learning what they were after, Aladdin finds out from the Oracle his father Cassim is still alive. Jasmine convinces him to seek out his father, and that their wedding can be delayed a little longer.

While he is away, Jasmine grows worried, and Genie cheers her up by dressing her in bridal outfits. When Aladdin returns with Cassim, she and the Sultan take an immediate liking to him. However, he later tries to steal the Oracle, and is put in prison; Aladdin helps him escape, but comes back to face his punishment. Jasmine and the Genie convince the Sultan that he helped his father out of love. At that moment, Iago (who was with Cassim) returns, telling them that Cassim has been captured by Sa'luk and the remaining Thieves.

Jasmine goes with Aladdin to rescue his father, and afterward they return for their wedding, which Cassim attends from the shadows. They go for a ride on Carpet, waving good-bye to the Merchant from the first film and Iago and Cassim as they ride off. The two then kiss passionately. 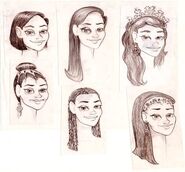 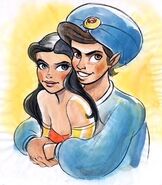 King of Thieves concept art of Jasmine and The Oracle