Jasmine and the Star of Persia is an illustrated storybook based on the characters from Aladdin.

After Aladdin tells Jasmine the story of the Star of Persia, they decide to find the jewel. Princess Jasmine discovers that she is wise, kind, fair, and special—just like the queen who once owned the precious jewel.

While stargazing one night on the Magic Carpet, Aladdin tells Jasmine the tale of the Star of Persia, the largest and most beautiful jeweled amethyst in the world, so much so that a star was named after it. It was said that this stone belonged to the Persian Queen who was said to be just as beautiful as the legendary jewel, but alas unlike the Star, the Queen could not last forever, and upon her passing, her people hid away the jewel in their tallest tower, sure that no one would ever be worthy of the jewel again. Jasmine was captivated by Aladdin's tale and asked him if it was true, to which he amusingly responded that he did not know himself, but that they should find out for themselves. So the next day, Aladdin and Jasmine journeyed to Persia and discovered a tremendous tower in the middle of a city which was protected by one lone guard, and upon inquiring the guard discovered that this was indeed the resting place of the Star of Persia. When Jasmine asked the guard if she could see the legendary jewel, he strongly refused, saying that only one was as lovely and as worthy as their queen was allowed to see the glorious jewel, for in order to see it, one must be lovely, wise, fair and kind. Jasmine was determined to prove herself and passed every test the guard threw at her, but for the final test, the test of kindness, the guard began to uncontrollably weep, being reminded of his beloved queen who he loved so dearly as he watched Jasmine's efforts. Jasmine was moved by the guard's love for his late queen and chose not to pester him anymore with her desire to see the jewel, but before leaving she wished to apologize by fetching for him a jar of water to keep him hydrated under the hot sun. When she went to the old fountain next to the tower she realized it was old and dry, but as she approached it, water began gushing forth from the fountain much to her surprise and she was quick to fill the jar. But when she turned around, she realized that the guard and all the people in the streets had gathered around her in awe, which confused the princess. The guard then revealed that the fountain had dried up long ago after the death of their queen and it would only ever pour water for her and her alone. Moved to tears once more. The guard went to the top of the tower and brought forth the Star of Persia for Jasmine to see. The humbled Jasmine and Aladdin were in awe of the Star's beauty, but were humbled even more when the people of the city pleaded with Jasmine to take the jewel, for she truly possessed all the qualities of their late queen and was truly worthy of the jewel's glory. So they begged her to take the jewel and told her that she could thank them by enjoying and cherishing the jewel as much as their beloved late queen did. Jasmine swore to care for the jewel and placed it on her headband where her old gem once rested. Aladdin and Jasmine then bade farewell to the people of Persia and promised they would visit whenever they could. With their newest adventure over, Jasmine now had her own starry story to tell alongside her beloved Aladdin's tale. 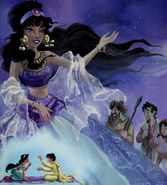 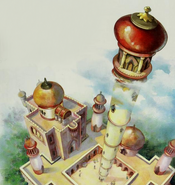 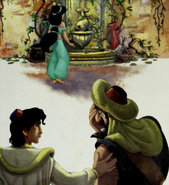 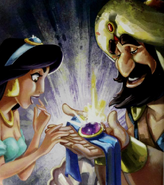 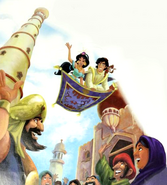 Retrieved from "https://aladdin.fandom.com/wiki/Jasmine_and_the_Star_of_Persia?oldid=18816"
Community content is available under CC-BY-SA unless otherwise noted.