Mode of transportation for Aladdin and his friends

Carpet possesses a very detailed and ornate appearance befitting a magic carpet, being made out of an enchanted and lustrous purple wool stitched together in such a way that it forms all manner of interesting patterns along its form, having ornate triangles and abstract symbols along his frame, the images of gold tiger heads on each of his four corners, flame-like patterns on its top and bottom, and in his center is the image of eight golden lamps positioned in a circle and surrounded by four gold scimitars which are surrounded by smoke-like patterns.

Despite being a carpet, Aladdin's Magic Carpet is a character of many traits, and pure of heart.

In the first film, Carpet was a bit shy when he first encountered Aladdin and Abu, but was curious enough to nervously fly over to investigate; eventually hiding once Aladdin first saw him or whenever Abu looked over. Aladdin had to coax him out of hiding, and soon, Carpet quickly befriended Aladdin and risks his own life to save him. He happily joins Aladdin on his magical adventure to win the heart of Princess Jasmine. One thing he does not enjoy is how Aladdin would not tell the truth about him truly being a street urchin, which was the only time Carpet showed any annoyance towards Aladdin.

Over the course of the series, he has shown to possess an almost-human level of intelligence, such as being shy, heroic, mysterious, romantic, adventurous, and unquestionably loyal.

He also seems to be very intelligent, as well as perceptive, more so than most other characters. He is usually the one that figures out what is going on before anyone else, though he has trouble expressing it to Aladdin and his friends due to his lack of ability to speak or make any sounds. On top of his intelligence, he is very compassionate and demonstrative, but occasionally lets his kindness speak over his common sense. Also, unlike Genie, he doesn't take losing seriously.

In the end, Carpet has been shown to have a strong bond with Aladdin, not only saving Aladdin's life on multiple occasions, but also doing favors for him such as helping Aladdin and Jasmine fall in love, despite his distaste for Aladdin's lies. In return, Aladdin has said to trust Carpet with his life (in Aladdin and the King of Thieves).

Carpet was created a thousand years ago by the legendary sorcerer and carpet weaver Khuriya who created one-hundred Magic Carpets each with their own unique patterns and colors. On the day of his death he commanded his creation to spread themselves throughout the world and find masters worthy of them to serve. Carpet and his siblings went their own separate ways, with Carpet becoming a resident in the Cave of Wonders to await the day for a kind-hearted master worthy of entering the cave to arrive. (The Magic Carpet's Secret)

Carpet is found by Aladdin and Abu in the Cave of Wonders while trying to find Genie's lamp. Abu first disagrees with Aladdin in letting him join their family but soon becomes best friends with him. He directs them to a lamp and tries to help them escape when the cave starts to tremble. He gets pinned down by a falling boulder, but is able to free itself to catch Aladdin and Abu as they fall back into the cave. The trio become trapped in there until they rub the lamp to unleash a Genie, who helps them get out of the cave.

Throughout the rest of the film, Carpet tries to help Aladdin win the heart of Princess Jasmine and save Agrabah from the evil Jafar. Aladdin (in his royal ego Prince Ali) and Jasmine ride on him to go on a ride around the world. When Aladdin and Abu become imprisoned in a tower by Jafar, he flies into the tower and helps them return to Agrabah to face Jafar and rescue Jasmine. In the film's final battle, he is unraveled by Jafar, but is restored once Jafar is trapped in his own lamp after becoming a genie.

Carpet is still with Aladdin and friends and still acts as a mode of transportation. He is first seen flying Aladdin and Abu out of a lair of thieves. Later he helps Aladdin and Jasmine reunite after briefly breaking up after the presence of Iago. He then takes Aladdin and the Sultan to a quit spot to patch things up as well but are ambushed by villains led by Abis Mal and Jafar. He is kidnapped and nearly escaped until being magically chained by Jafar. After Genie and Aladdin rescue the group they go off to battle Jafar. In the start of the fight, he is turned to glass and shatters into pieces on the ground. After Jafar is killed, he is restored to normal and welcomes Iago.

Carpet appears as a main character in the film's spin-off television series, featuring prominently in several plots; on one occasion Aladdin's enemy, Abis Mal, stole and forced him to fly him to the location of a valuable treasure by threatening him with moths, while another episode featured him feeling dejected after the group met a race of sprites who allowed them to fly without him (Although he later proved his continued worth by tricking the sprites into settling the palace back in its original location after they got angry at the rest of the group and nearly allowed the palace to crash). He has a somewhat friendly rivalry with Genie as the two often play each other at various games such as chess (with Carpet, much to Genie's frustration, often winning). He proves to be somewhat fearless not caring how cruel or mighty their opponent might be, when Aladdin or one of his friends gets hurt, Carpet rushes into battle.

Carpet reappears in the film's final installment along with everyone else. In the film Aladdin and Jasmine are finally getting married but things become dangerous when the former and the palace family meet the forty thieves led by Aladdin's missing father, Cassim. Carpet joins Aladdin and the friends as they journey to discover the secrets of his past.

Notably, after meeting Cassim and convincing him to return to Agrabah, the latter was openly disapproving of Aladdin owning a magic carpet, and using it as a mode of transportation; believing it to be dangerous compared to the traditional choice of horses. By the end of the film, when Carpet saves the lives of Aladdin and Cassim, the latter shows a change of heart towards his son's companion.

Hercules and the Arabian Night

In the special crossover event, Carpet and Aladdin battled the Greek hero-in-training Hercules after they were fooled to believe he had kidnapped Abu. Rivaling Hercules' flying companion, Pegasus, Carpet assisted Aladdin throughout the battle until it was discovered that Hercules was framed as part of the scheme concocted by Jafar and Hercules' nemesis Hades in an attempt to have the two heroes kill each other in combat. After the truth was revealed, Carpet and the others headed down to Hades' home in the Underworld to defeat the duo.

In this story, during a time where Aladdin and Genie are away, Carpet serves as Jasmine's personal assistant, tagging along with her on various royal events such as parades and openings in the bazaar, as well as making sure she keeps up with them all, whilst still being ever so loyal and friendly to her in the prices. Nonetheless, he appears to support Jasmine's dream of becoming more than a mere "peacock princess" and immediately lends a helping tassel when the prized horse of Jasmine's deceased mother escapes the palace due to the accidentally bumbling of Abu.

Carpet appears along with Jasmine in the episode, "Two to Tangu", where he hears Jasmine whistling and he appears out of a tunnel and flies her with another Magic Carpet flying Sofia and Amber following him behind during the song The Ride of Your Lives. Then he flies Jasmine back to Agrabah after saying goodbye to Sofia and Amber.

Cameos and other appearances

In The Hunchback of Notre Dame, Carpet makes a cameo during the song, Out There. He is seen under a man's arm straight after Belle's cameo.

Carpet makes several cameos in the series House of Mouse. His most notable is in the episode "Donald Wants to Fly". In the beginning he flies Mickey onto stage. Later he performs an incredible stunt even having Phil say to Hercules "Whoa, you can't beat that rug!" In the episode, Donald's Lamp Trade, he rescued Donald from the basement after his attempt to steal forbidden treasure. He also appears in the episode, Chip n' Dale for a few moments as he helps them retrieve the nuts Goofy passed out.

In The Lion King 1½, Carpet made a cameo during at the end, in the cinema with Aladdin and Jasmine.

Carpet also made a cameo in the beginning of The Princess and the Frog. When Tiana is going to her second job, he is shown as the floor rug a woman is shaking out.

In Once Upon a Time in Wonderland, Carpet appears as a vehicle used by Jafar who established his base on a floating island in Wonderland. In a flashback, he is also used to capture Cyrus, during its fall caused by the Red Queen.

In Descendants: Wicked World, the carpet can be seen laid out on the floor in a shop on the Isle of the Lost. However, the carpet in the episode is missing the tiger heads in the corners and the tassels. Jordan, daughter of Genie, has a similar carpet in her Lamp, but in different colors.

Carpet also makes an appearance in Kingdom Hearts 358/2 Days with Genie. A notable part about this appearance was how he was eerily able to see the connection between Sora and Roxas when he believes the latter to be Sora, although Genie dismisses it.

Carpet appears in Disney INFINITY: 2.0 Edition as a rideable mount, being a rare Power Disc.

In World of Color, Carpet appears in the A Whole New World musical sequence along with Aladdin and Jasmine.

Carpet also appears in the computer animated show, Mickey's PhilharMagic. In the show Donald Duck travels through various Disney films on the hunt for Mickey's sorcerer hat. He appears during "A Whole New World".

Carpet also played a significant role in the stage musical, Aladdin: A Musical Spectacular in Disney's California Adventure. Here, he was played by a female actress and acts alongside Genie as a comic relief. During the "A Whole New World" scene, she becomes a lifeless prop. 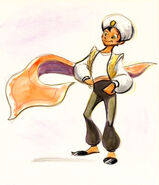 Originally, Carpet was not planned to be in the film from the start, and at one point another genie would've filled the Carpet's role before being replaced entirely by the Magic Carpet. Carpet also went through several designs, ranging from plain orange to more elaborate designs similar to his final one.

Carpet is known for being one of the first computer-animated characters in a feature film. His complex design forced the animators to design his pattern in computer animation.