Magic Carpets or Flying Carpets are one-hundred legendary enchanted carpets woven a thousand years ago and spread out across the world.

A thousand years ago, one-hundred magic carpets were woven and enchanted by the legendary sorcerer Khuriya. When he sensed his that his death was imminent, he instructed his creations to scatter themselves throughout the world. Hours before his death, he told his apprentice Asmar the secret to creating and enchanting the Magic Carpets and that it would be his duty to maintain the power of the carpets and to teach the secret of the Magic Carpet art to his descendants and successors, for in order to maintain their power and life for all time a special ritual must be carried out daily:

“Each evening at sunset, you will weave a small square of cloth on this silver loom. Use threads of gold. You will weave the letters of my name, Khuriya, into the cloth. Then, at sunrise each morning, you will unravel the gold cloth, save the threads, and use them to reweave the cloth at sunset.” - Khuriya

Failure to continue the ritual will result in all magic carpets losing their power before ceasing completely. Only 100 of these carpets were ever made by Khuriya and as such they are incredibly rare, and the only well known carpet is Aladdin's own Magic Carpet who made its home in the Cave of Wonders a thousand years ago to await the day for a kind-hearted master worthy of entering the cave to arrive. (The Magic Carpet's Secret)

While many of the carpets remain hidden, the location of a few are known, such as the carpet under the ownership Prince Li and a very small handful of people from different nations from around the world who use their flying carpets for the annual carpet races in the Jade Mountains of China. Abis Mal also briefly owned an old and tattered flying carpet which he himself stole from Agrabah for the race, but it was destroyed near the end. (Carpet Diem)

Asmar and Asha on their flying carpet 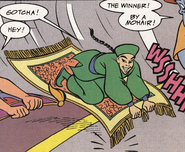 Flying Carpets from around the world 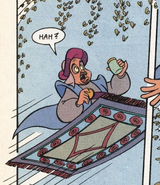 Abis Mal's magic carpet about to be eaten by moths

Magic Carpets from Sofia the First 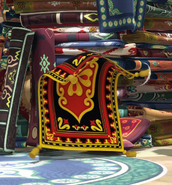 Retrieved from "https://aladdin.fandom.com/wiki/Magic_Carpets?oldid=18306"
Community content is available under CC-BY-SA unless otherwise noted.