Shadigna
The Peddler is a traveling merchant and storyteller who on rare occasions visits Agrabah to sell his defective goods or tell one of his tales.

The Peddler is a very short, slender, bald man with tan skin, a thin black goatee, and a rectangular mustache with a triangular gap at his philtrum. His clothing is quite simple, consisting of a sky blue robe that reaches the floor, a red sash tied around his waist, and brown sandals. The most noticeable aspect of the Peddler's outfit is his ridiculously large white turban, which is twice as big around as his own head.

The Peddler appears at the very beginning of the film, singing the theme "Arabian Nights" on Shadigna. The Peddler attempts to show the audience some of his fine merchandise, but they are not interested until he unveils the Genie's lamp. He then begins to tell the story of how the lamp "changed the course of a young man's life".

The Return of Aladdin

The Peddler once again serves as the narrator for this tale taking place shortly after the first film.

The Peddler appears vocally once again, singing a modified version of "Arabian Nights", but does not make a physical appearance.

Though he never appeared in the series, the Peddler serves as the singer of the show's intro.

The Peddler appears at the end of the film, singing a reprise of "Arabian Nights" (notably originally intended for the ending of the original film) and waving goodbye to Aladdin and Princess Jasmine as they celebrate their marriage.

The Peddler occasionally appears in printed media but mostly those that are a retelling of the first film.

The Peddler makes several appearances throughout Virgin Interactive's Aladdin video game. He gives the player, as Aladdin, extra lives (up to 9) and "wishes", which are actually just continuing.

The Peddler's role in the Kingdom Hearts series is greatly expanded and plays an important part in the storyline in Agrabah in Kingdom Hearts II. He is first seen chasing Abu, who had stolen a lamp from him, not knowing it was actually Jafar's. To prevent the risk of the evil genie's freedom, Sora and friends try to purchase the lamp, but the Peddler will only give it to them in exchange for treasure. The gang returns to his shop later to present him with a golden statue, only to find the Peddler gone. Outside of this, Pete chases the Peddler (still holding Jafar's lamp) for the lamp, until Iago arrives and scoops up the lamp. After defeating the Heartless sent by Pete, the Peddler sells them the lamp, which is then sealed away deep inside the palace. However, when the Peddler tries to steal the treasure, later on, he accidentally releases Jafar. Despite this, after the player has completed story events in Agrabah, they may return to his shop to find him hawking a skateboard, which the player can use freely as part of a minigame.

In Epic Mickey: Power of Illusion, Mickey finds the Peddler (who ended up in Wasteland due to Mizrabel) in the Cave of Wonders area of the Castle of Illusion, and directs him to the Fortress, after which Mickey can help him set up his shop. From there on, Mickey can buy items and upgrades from the Peddler's shop.

The Peddler made appearances in the Disney Parks in the early 1990s but was removed from the face character roster.

He makes a notable appearance in the 1987 sitcom Full House in the episode "The House Meets the Mouse".

The Peddler in Aladdin and the King of Thieves 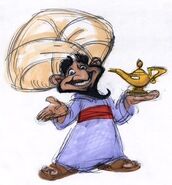 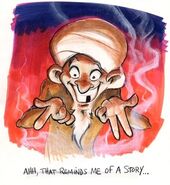 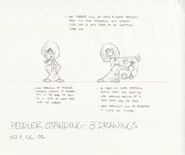 In an early concept, the Peddler was going to reveal himself to be the Genie in disguise at the end of the film. However this concept was abandoned and the Peddler even appears as a separate character from Genie in the video games and sequel material. However, there's still a nod to the original concept within the films; both characters are voiced by Robin Williams (save for the Peddler's singing voice), the Peddler's robe look just like Genie's body, both only have four fingers (the only human in Aladdin with this trait) on each hand and have similar personalities.

In October 2015, directors Ron Clements and John Musker confirmed this by stating that the Peddler was intended to be the Genie, but was scrapped and the 2011 musical and the 2019 live-action adaptation references this concept by making the Genie become a human who narrates the story.

Despite being depicted as separate characters in the video games and sequels, the Peddler and Genie never appeared on screen together with the exception of Kingdom Hearts which isn't part of the original Aladdin multimedia. The ending in Aladdin and the King of Thieves even shows Aladdin and Jasmine leaving Agrabah but not before waving a fond goodbye to the Peddler as they go on their honeymoon while Genie is nowhere in sight, thus still allowing for the possibility that Genie became the Peddler after Aladdin and Jasmine finally married.

Retrieved from "https://aladdin.fandom.com/wiki/Peddler?oldid=19290"
Community content is available under CC-BY-SA unless otherwise noted.