The Shiva-Monkey or Monkey Idol is a golden idol within the Cave of Wonders that guards the marvelous Monkey Ruby.

The Shiva-Monkey is a figure resembling a large golden gorilla with sharp teeth and a vicious smile. Its depicted as wearing a decorated headdress and sitting upon an even more heavily decorated golden base. The Shiva-Monkey has numerous golden statues bearing its likeness, with some possessing four arms.

The Shiva-Monkey was first spotted by Abu after he, Aladdin and Magic Carpet made their way into the chamber of the Genie's Lamp. Upon seeing it, Abu became enamored with the beautiful lustrous ruby perched on the statue's hands and wanted nothing more than to steal it. Carpet then tried to stop Abu but failed, inciting the wrath of the Cave of Wonders who then melted the statue and destroyed the rest of the cave.

When the evil sorceress Nasira appears to avenge her brother Jafar, she manages to imprison Genie and seals him away within the Cave of Wonders to keep him from interfering in her plans. It is then up to Aladdin to return to the Cave and find Genie. Aladdin briefly passes by another Shiva-Monkey statue as he traverses the many pathways of the cave.

It occasionally appears in printed media but only those that are a retelling of the first film.

In the game, the Shiva-Monkey is an enchanted statue that can teleport, grow four arms and summon a sword that acts as the boss and guardian of the chamber where the Genie's Lamp is kept. Upon being defeated it disappears and becomes an ordinary two-armed statue which Abu then takes the ruby from, causing the Cave to collapse.

In Kingdom Hearts, several of these statues appears in the Cave of Wonders, but unlike in the film it is required to touch their treasure in order to open new pathways within the cave.

In Kingdom Hearts II, various version of the statue are seen throughout the cave, some far larger or far smaller than the original, with one acting as a guardian blocking the path deeper into the gave, some giant ones holding golden urns that pour out golden coins, and a very small one resembling the one from the film with a small ruby as well which Iago and Abu tried to steal. However touching these statues or their treasures does nothing, however the first statue will summon a horde of angry stone guardians to attack the party after Abu stole its floating ruby. 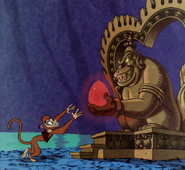 Retrieved from "https://aladdin.fandom.com/wiki/Shiva-Monkey?oldid=19175"
Community content is available under CC-BY-SA unless otherwise noted.