Val Bettin (in all other media)

Jasmine (daughter), The Sultan's father (deceased), Bobolonius (grandfather, deceased), Sheik Hamed (ancestor, deceased), The Sultana, (wife, deceased), Aladdin (son-in-law)
Sultan Hamed Bobolonius II of Agrabah (or simply "The Sultan" for short) is the ruler of Agrabah, father of Princess Jasmine, and one of the protagonists in Disney's 1992 film Aladdin, its sequels, and television series. He was voiced by the late Douglas Seale in the first film, Val Bettin in other appearances, and Jeff Bennett in More Than a Peacock Princess.

The Sultan is described in various media as being pompous but kind. He seems to be somewhat childish, as he is often seen playing with various toys. Though he dearly loves Jasmine, he is initially frustrated due to her constant rejection of potential suitors and pushes her to choose a husband. However, he explains his actions regarding the subject as arising from a need to make certain that Jasmine is cared and provided for, as he is starting to get up in years. The Sultan also prides himself on being an excellent judge of character. However, contrary to his own belief, he is rather gullible, as he does not realize that Jafar is untrustworthy until Aladdin points out Jafar's plots.

The Sultan is said to be beloved by his subjects, but sometimes becomes frustrated with his daughter. He adores her, but does not seem to understand why she would want a life outside the palace. As the law states that she must marry a prince before her next birthday, he becomes worried when Jasmine refuses all potential suitors. He is unwittingly controlled by his Grand Vizier, Jafar, with the aid of Jafar's snake-staff, and it is probable that this has been the case for some years.

Upon meeting 'Prince Ali Ababwa', the disguised Aladdin, the Sultan is instantly impressed by the pomp and grandeur of his entrance, so much so that he quite forgets that he has not invited nor indeed ever heard of any Prince Ali. He allows "Prince Ali" to remain at the palace while he tries to court Jasmine.

Later, Jafar attempts to kill Aladdin to prevent him from marrying Jasmine. Jafar then hypnotizes the Sultan in ordering that Jasmine marry Jafar. However, this plan is foiled when Aladdin reappears, and reveals Jafar's treachery. The Sultan orders Jafar's arrest, but Jafar manages to escape. After seeing Aladdin and Jasmine together, he realizes that the two have fallen in love, and Jasmine confirms that she has chosen "Prince Ali" as her suitor. The Sultan is utterly delighted that Jasmine has chosen a suitor and without hesitation blesses their union.

The very next day The Sultan announces it to the kingdom, but Jafar returns with the lamp and wishes to become Sultan. When the Sultan and Jasmine both refuse to bow to Jafar even as the sultan of Agrabah, Jafar makes his wish to become a sorcerer. He transforms the Sultan into a living marionette whom Iago takes out his anger about being force-fed dry crackers on. However, when Jafar is defeated, all returns to normal. When everything returns to normal, the Sultan overhears Aladdin telling Jasmine goodbye, as Jasmine can only marry a prince. Noting that Aladdin has proven his worth as far as he is concerned, the Sultan decides to change the law so that Jasmine can marry the man whom she deems worthy, Aladdin.

In The Return of Jafar, the Sultan announces that he wants to make Aladdin his new grand vizier. However, he grows suspicious of Aladdin after he defends Iago, who used to work for Jafar, and commands him to watch the bird. When Jafar returns, he takes advantage of Iago's new position as an "ally" to Aladdin, and makes him suggest the Sultan and Aladdin to have a discussion in a place where they are ambushed by Jafar and Abis Mal. The Sultan is imprisoned along with Aladdin's friends, and Jafar uses his turban to frame Aladdin for his murder. He is later freed by the Genie and is later seen at the end of the film, again requesting Aladdin to become his vizier but Aladdin turns down the Sultan's offer because he wishes to travel and see the world with Jasmine.

Throughout the TV series, the Sultan played a prominent supporting role, with a few episodes looking at his efforts to form alliances with other nations - including one occasion where he was nearly roped into a marriage to an Amazonian-esque queen, and others looking at his past; one episode saw Aladdin and the gang forced to deal with a plant-based sorcerer named Arbutus whom the Sultan had unintentionally offended by taking a rose from the creature's garden in his youth. Arbutus demanded that in 20 years he wanted the Sultan's most precious treasure in return - and this 'treasure' was Jasmine.

In Aladdin and the King of Thieves, the Sultan meets Aladdin's father, Cassim, not knowing he is the King of Thieves, and immediately accepts him. However, Razoul later reveals to the Sultan that Cassim is the King of Thieves and, with no other choice, the Sultan has Razoul incarcerate Cassim in the dungeon for life. After Aladdin helps Cassim escape the dungeon, and comes back to accept the consequences for his actions, the Sultan prepares to punish Aladdin in anger for freeing Cassim, but Genie and Jasmine come to his defence, stating that all he wanted was to give his father a second chance. The Sultan accepts his apology. At the end of the film, his wish of seeing Jasmine marrying someone comes true when she marries Aladdin.

The Sultan plays a minor role in Disney Princess Enchanted Tales: Follow Your Dreams, giving Jasmine the job of "Royal Assistant Educator" at the Royal Academy. Later, one of his most precious horses, Sahara, is missing from the stables, so Jasmine, along with Iago, Abu and Carpet, to find Sahara and return him to the palace.

The Sultan appeared in cameo in House of Mouse with his daughter Jasmine. 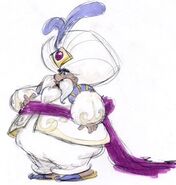 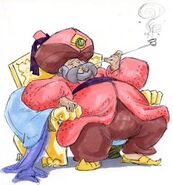 Retrieved from "https://aladdin.fandom.com/wiki/The_Sultan?oldid=19677"
Community content is available under CC-BY-SA unless otherwise noted.